Return To The Roots - Addons

Well, some of you already know, that I've released a 1024x660 World-Map. Sadly my game crashed, or savegame is corrupted so
I just thought about having a smaller version of my map - here it is, 50% smaller than the original file, just resized my
bmp file and converted it again.
Now I need some help:
If you find ANY objects that seem missplaced, report them (coordinates are enough)(press "F3" for ingame coordinates)
If you find ANY passage you can't pass but you think you should, report them (coordinates are enough)
Note: No "real" heights set
Note: I only spawned players in europe and asia as australia/america would be 1 continent/player which seemed unfair.

if you have any suggestions - feel free to write them down.

Very nice spike, thanks for your work! We want to play the large map over LAN and it doesn't
work. After a few minutes of loading we quit the game. I think our PCs are not good enough. We
will try it again with the smaller version and I will report how it works.

are you using the latest nightly version?

No, I'm using the latest stable version. Does the map not work with this version?

Ah, okay. In singleplayer it works fine. The problems are only over LAN. We will check it.

The big map took a whole lot of time to load in LAN. When I was playing it with a buddy (two computers in total), it took me two minutes and him an additional 7 to load it. Note that it will load for a long time in both the setup screen and the actual inagem map (which will be stuck at 0 frames for quite a while for whoever is in there first :) )

Didn't get around to test this map yet, but that might happen on the weekend. Looking forward to it, and as much as I enjoyed the big gigantic map, this might be one to actually finish playing on :D

A map for the whole weekend. :D

Really a nice map! I like it and started to play on single player mode.

Yeah you are right, couldn't find any time to finish this map :-/

So will you find time in the future to work on the map?  The map is great and I think it should not be abandoned. If you
don't find the time I would continue your work, if that is ok.

You can do what ever you want with that map as long as you still include my name in the Author list I don't care what
happens ;)

I did not find an Author List in the Map Editor so I just changed the name from "Spikeone and Tool" to "Spikeone and Co".
So I am the Co-Pilot. :-)

I really like  to play with the map AI. I did not try it on LAN. I mad some minor modifications, like:
- Removed unnessesary harbor
- Some places is Africa where not accessable. And South-Africa is in the real world a place where you can build farms.
Lots of good whine comes from there. So I've modded there as whell
- For balnace I've added some more green spots in europe

that's it. Again Thanks Spike for that great world.

Here it is:
Smal World V3

I'll just review it and maybe it will be added as final version ;)

Well looks like it's still nearly impossible to pass from north to south america without ships. Also
mountains still have no proper heights :-/

Yes, you are right about that!

So me, Ofe and Janexo, were playing some RTTR against bots yesterday on your 512x330 worldmap. We had to modify the map a bit to
actually play on it (shuffle starting positions, randomize resources using spiketool and balance some of the places, like Australia.)

We had great fun and all that, but I have one question:

Is there any way to make the map bigger than it is, but smaller than the 1024x660 version? Like 3/4 of the bigger worldmap? Is there a
tool/method that will allow to resize the map?

We tried playing the bigger worldmap w/ bots, but it was just: lag/crashes/endless saves all the time, while we played the smaller one
and saving the game only took like 10-15 seconds instead of 10 minutes.


Edit: Also here is a screenshot of us 3 dominating the world and I gotta say, bots are much better than before. 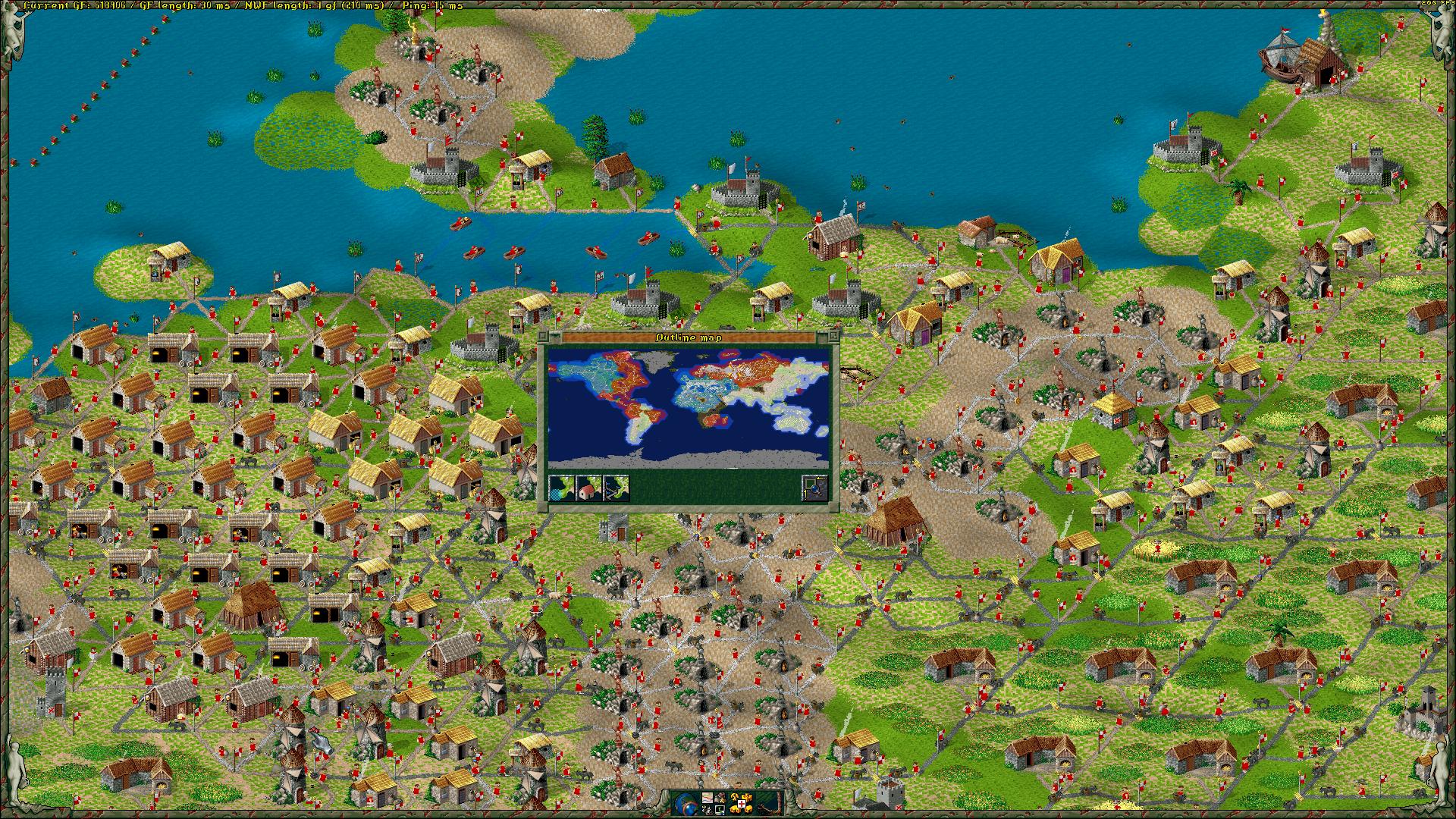 There is a way, not the best positive but still. This 512x330 map was made by first resizing my 1024x660 .bmp file to
512x330 and then converting it to a map file. So I may recommend using that image (posted it somewhere), resizing it to
680x438 (or something around) and converting it again - then you may use my random tools to get a well, but not perfect,
spawned map. You may also publish it here then.

@Spike: Sure I'll try to find it and do it in the free time. Too bad SWD->BMP tool is not working :/

EDIT: BMP->SWD Doesn't seem to work either. I get a mess after converting it and loading it in the editor.

You can't use odd sizes... Oh well but I remember some time ago I got rid of base maps. Guess I have to try it myself later...

EDIT: Just tried it - you were doing it wrong somehow.

How to fix async?
Many times I had problems with async.

---
Martin (DMM)
It is never too late to start play RttR!

Thanks Spike! This is what I need ;)

Well while the BMP->SWD map tool is working now properly, I can't seem to use the Random-Heights-Tool option (07).

Objectplacement.exe just freezes after i enter the random 8 digit number. 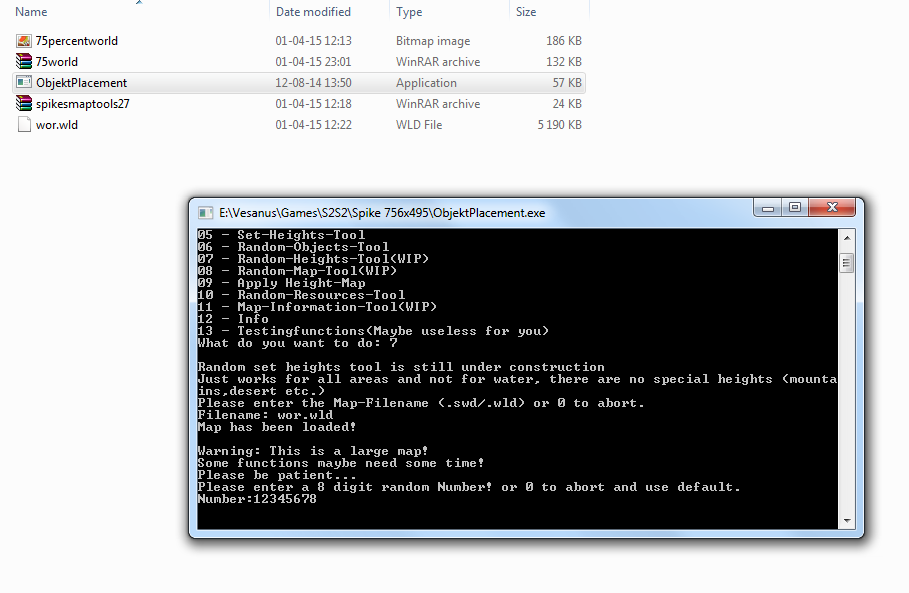 Is it because its still WIP?

Nah, looks like I bugged something :x I'll investigate it tomorrow. Until I've fixed it you may try an
older version like: http://www.rfmonline.de/rttr/spike/spikesmaptools26.rar

I tried version 26 and it is just amazing.

Everything is working! :D

Mhh, have to Check my commits :D But I guess I wanted to make some checks more reliable and secure

EDIT: Should work like it did before now. I started adding height generation for mountains but... never finished it and have no idea
what I tried to do :D
http://www.rfmonline.de/rttr/spike/spikesmaptools28.zip