just finished some sea maps I've been working on for a long time. I really tried hard to make them look nice, which was A LOT of work!
(I think you will see that :D)
Think I should share them to make this project not be only for myself. However they'll need some words of explanation as I designed
them to suite my own preferences regarding game settings.

All of the 3 maps are 256x256 sea maps with a ton of habour positions. These are all designed to be played COOP/Singleplayer versus AI
(if you're looking for balanced multiplayer maps, you won't find them here :)).
Though I guess they could be fun PvP as well.

I already uploaded the first map some time ago: 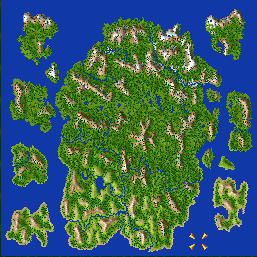 - all players start on their home island and should finally meet on the main land in the center of the map
- please take in consideration, that there is plenty of land and players will have TONS of soldiers as a result
- If habour attack is turned ON the AI will overrun you with hundrets of soldiers as soon as they scout your habours
- neither the home islands nor the main island positions are balanced, I usually take the ones I enjoy most from a landscape point of
view

My prefered settings are the following:
- inexhaustable mines: with unlimited room for food production, the mountains would be empty VERY soon. (plus there's very little gold)
- no habour attacks, unless you like to put 200 soldiers into you habours :)
- increase ship speed to make your economy run smoothly
- rest is up to you

I've already tested this map several times and it's really enjoyable, takes some hours though. The main downside are the assyncs in
multiplayer. They usually occur at about the time, when you meet your enemies on the main islands (after 2 hours?).

For that reason, I've created some different versions of the map: (I will upload them if you want them)
1. everyone starts on the main island (this one is actually the most fun imo, the top positions are utterly unbalanced though)
2. some islands are connected to the main land (this improves the AIs performance --> faster reinforcements)
3. only AIs start on the main land, so you can build up several islands and start sea attacks. This isn't as enjoyable since AIs
started to use sea attacks as well, but maybe that's just me :D


Amazonas (6 players): just finished this one a few minutes ago 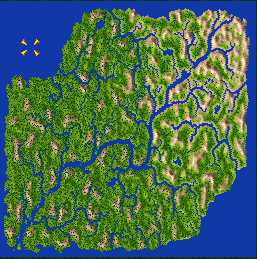 - it's basically a huge land with rivers all over the place
- habour positions are in the middle river and at the coasts
- again there's a lot of farming land so you should expect huge battles. However the same sea-attack problems occur.
- you can pass the main river at the top and the bottom, so every player should have 2 enemys. As a result, ships can only use the
rivers in the middle, or the sea outside.
- you can block small rivers with military buildings so nobody can attack, just don't delete a pass right when an enemy attacks or the
game will crash!

- inexhaustible mines
- no habour attacks (you can reach all the habours by land)
- increase ship speed
- play with few catapults only, they can shoot across the rivers, which can be abused heavily!

I only tested the map occasionally, but not the final version. The bots are doing fine, some positions have far more land, but it
doesn't really matter.
There are going to be 2 seperate islands in addition in a future version. 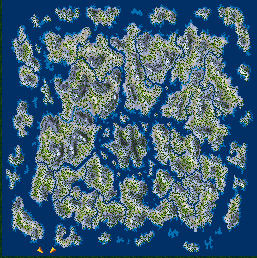 - all players have a habour position right from the start. You can only reach the outer islands though.
- the inner island has tons of gold, but you need to find a suitable habour position to reach it

- again inexhaustible mines, some players have far more ressources due to design changes during the development
(my first winter themed map):D
- rest is up to you

I've only tested this map one time, when it wasn't finished. Must have been a year ago...
The AI didn't do that well, but maybe that has changed.


All in all these are funmaps, I don't think they are suitable for competitive play. If you play them in multiplayer, expect an assync
at some point. This is annoying, but it usually takes about 2-3 hours, sometimes even longer.

There are going to be some "patches" for sure since I didn't really test the last 2 maps by now. I'll try to keep the download link up
to date and leave a note for every update.

- forgot the animals, sorry! (but they are spawning very soon, there's forest all over the place)
- ruins and objects from the singleplayer mission
(not implemented by now since I dont know a handy way to do that. The tool from the forums (i believe Spike created it?!) is really
cool, but it would be a ton of work and I wouldn't have a preview of the object...)
Editiert von Sintho am 13.12.2014 21:56

These look great! I really like the detail level you achived there. You must've put a lot of work to create them. Keep it up! :) Still, too bad that the asyncs occur.

Wow those maps really look awesome! I'll be sure to test them out soon, although normally I don't like playing with inexhaustible mines. After I played through them I will give you some feedback.

Wow, they are nice maps !!! You must spent a lot of time to do it.
I've already looked on it and I like the maps.
I do not play big maps very often but I really like a rivers, trees and souces.

---
Martin (DMM)
It is never too late to start play RttR!

Thanks for the feedback!
I'll definitly make a smaller map next time, I'm getting tired of the 5 hour matches myself, haha.

watching these river maps i have an idea of a new building for all the races, a "bridge" it will we the same as a
road, but you can build one bridge only when the rivers width is small. What do you think of it?

Use the search function and search for "bridge"

I would love to play these maps. The download link of these map is broken, would it please be possible to update it?
Many thanks
Feel free to post in English!